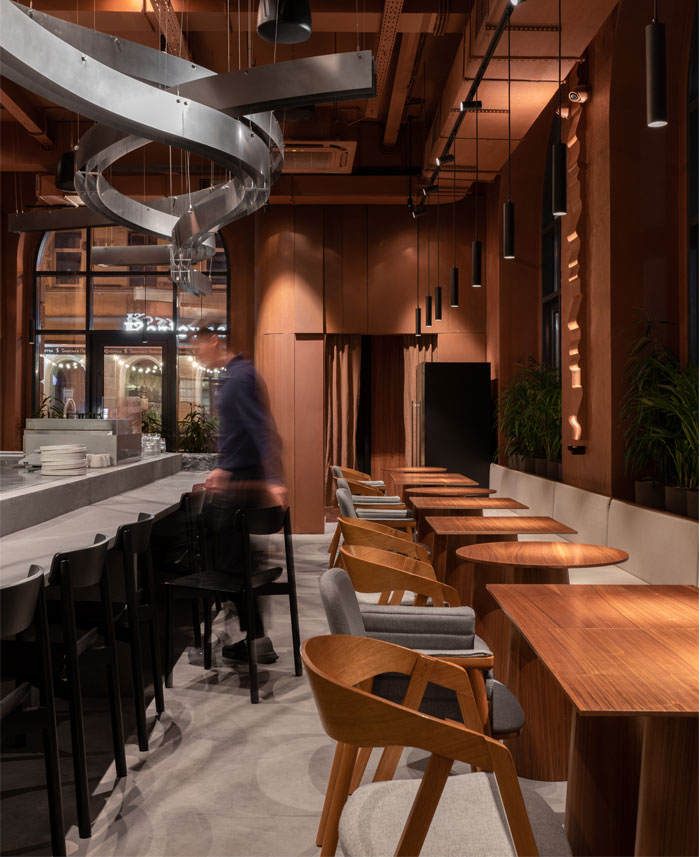 The idea is built around the four states of a butterfly’s life: caterpillar, chrysalis, young and mature butterflies – this is an independent life cycle. The cycles are reflected by the states of materials: from stone to stainless steel, and from clay to Corten steel. Above the bar there is a suspended undulating structure made of stainless steel, reflecting the flight path of a butterfly frozen in an instant. 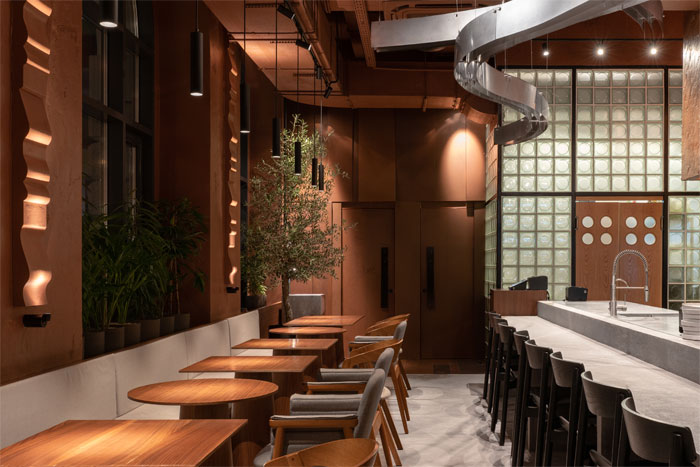 Entering the restaurant, a small vestibule with a linen curtain does not immediately give us a glimpse of the room. The curtain from the open door develops, and we see scraps of the interior through the materials: stone, wood, and steel. We need to let the guest begin exploring the interior by touching the natural linen. Walking into the interior, we enter the corten shell as if we were a mature butterfly ourselves. The shadows of the corten panels shifted relative to one another like a camouflage pattern on the wings of an Attacus atlas. 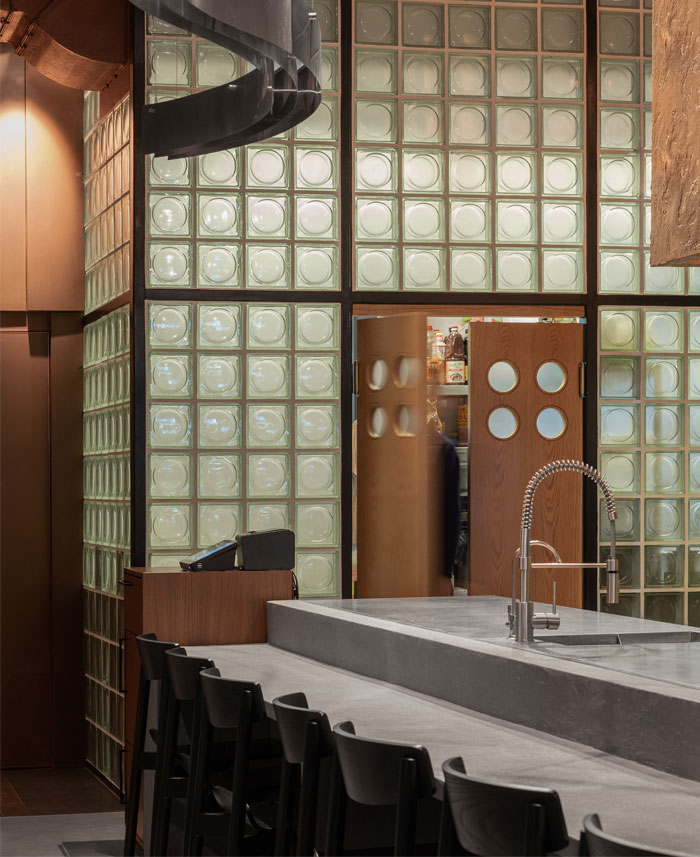 In the back of the room is the intimate area of the restaurant – the space for the restroom. A steel monolithic sink immediately attracts attention, and in contrast to it, a small mirror descends from the ceiling on a three-meter pipe, repeating the circle pattern of glass blocks. On the right side of the sink are the doors to the latrines. Choosing the left door, the visitor will find a highlight – a mirror with worn amalgam around the perimeter, reminiscent of special butterflies with translucent wings. 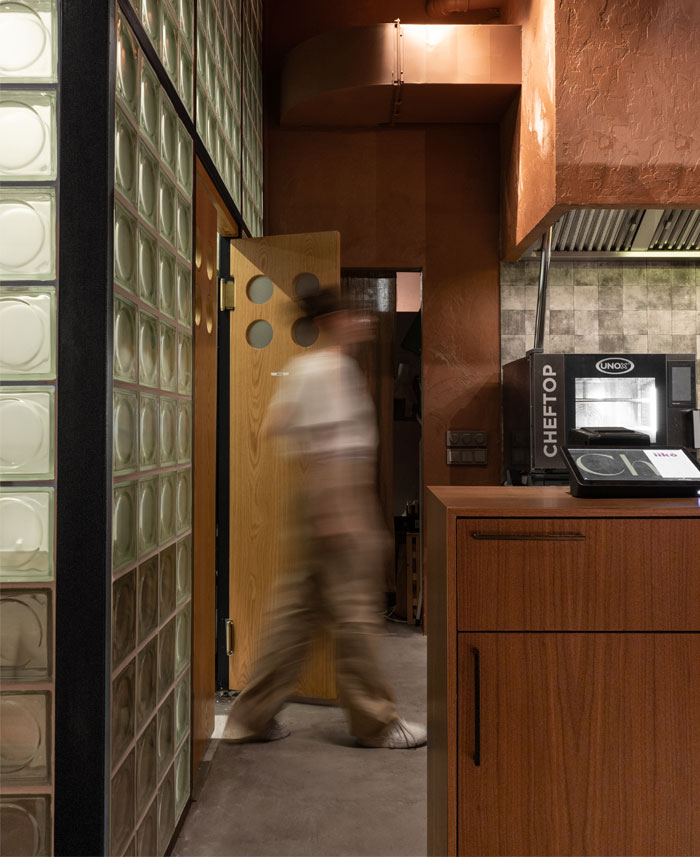 Functionally, the hall is built around an open kitchen, where chefs in branded T-shirts cook intently. The rest of the staff moves into the closed part of the kitchen, made of glass blocks, through which the shadows of people are visible. Diners become spectators of the food being prepared, seated in semi-bar seating behind the stone-topped open kitchen. The main seats go along the hall’s perimeter: on the long side – the dining group alternates with tables of various shapes, tables made of walnut veneer, and on the short side with tables made using the “Kintsugi” technique. 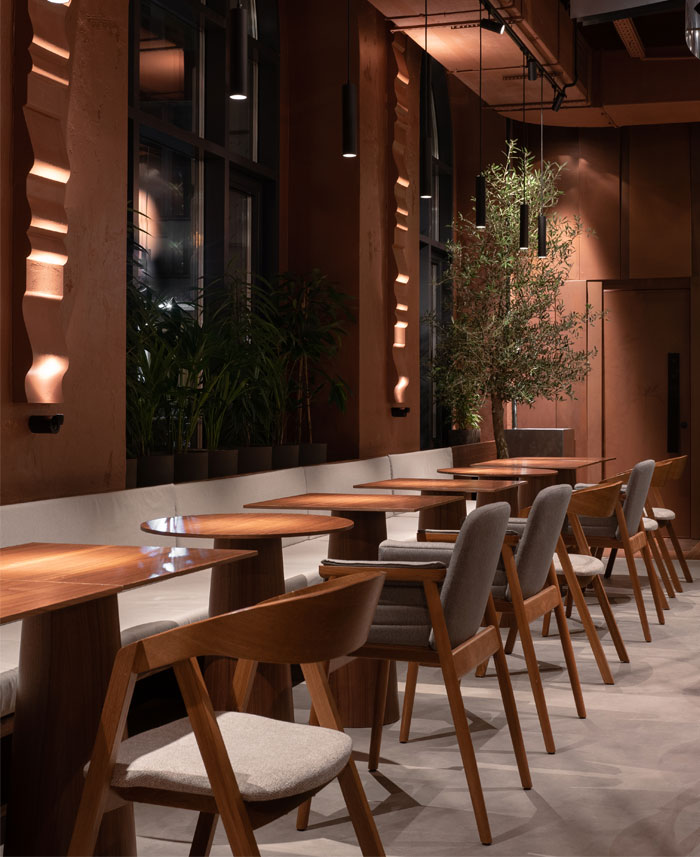 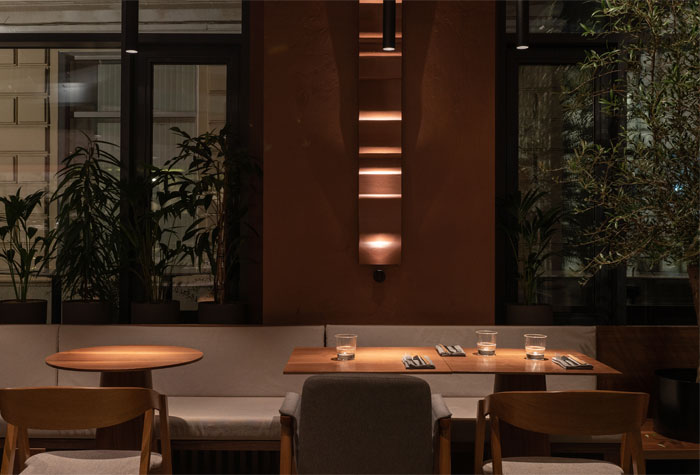 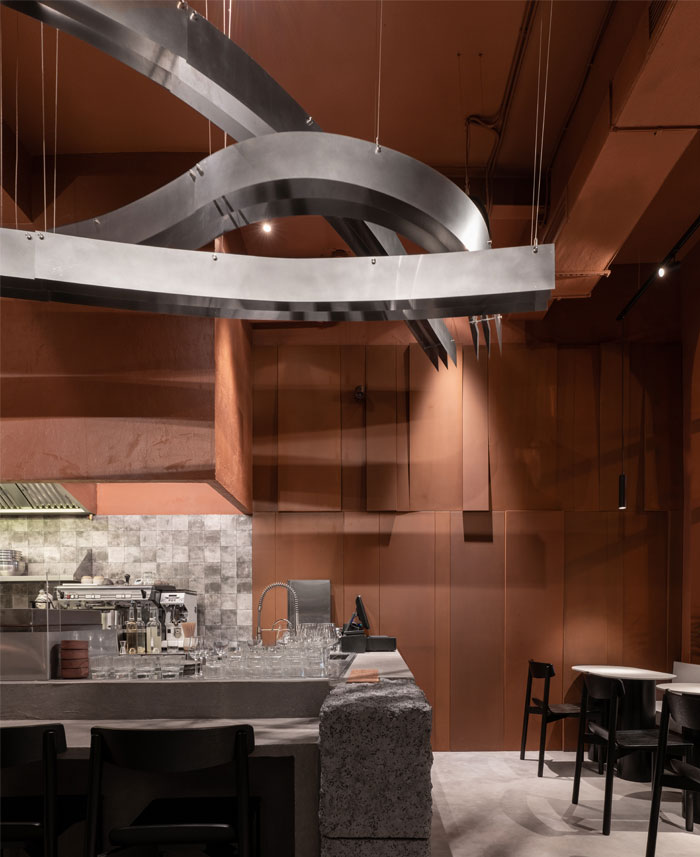 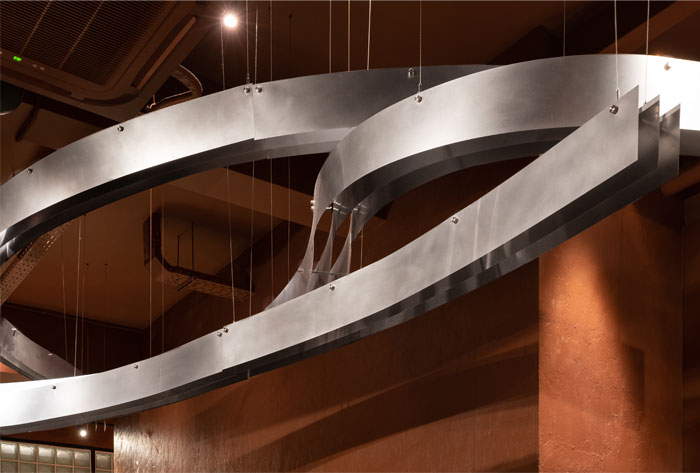 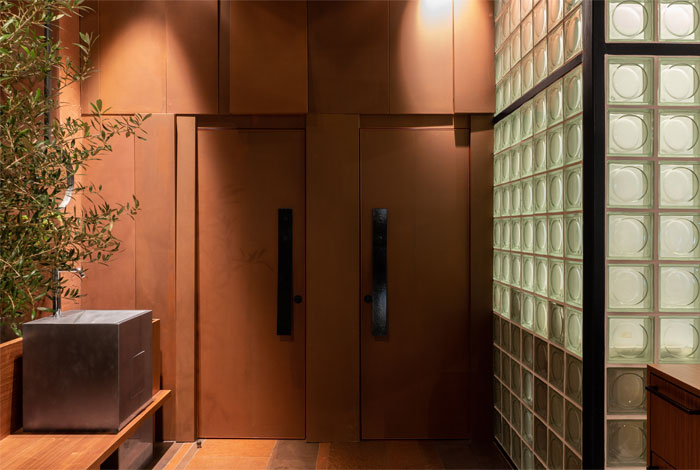 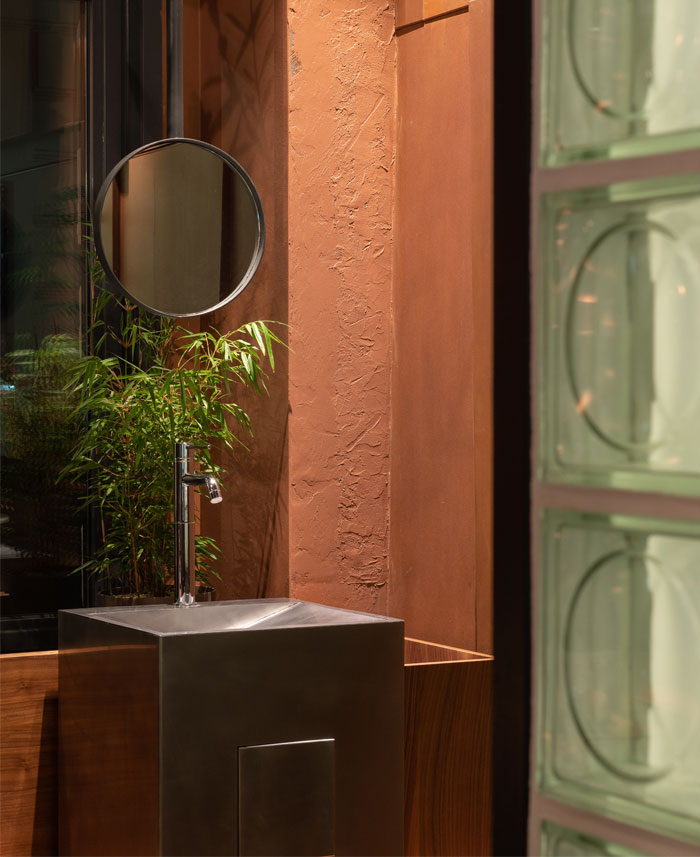 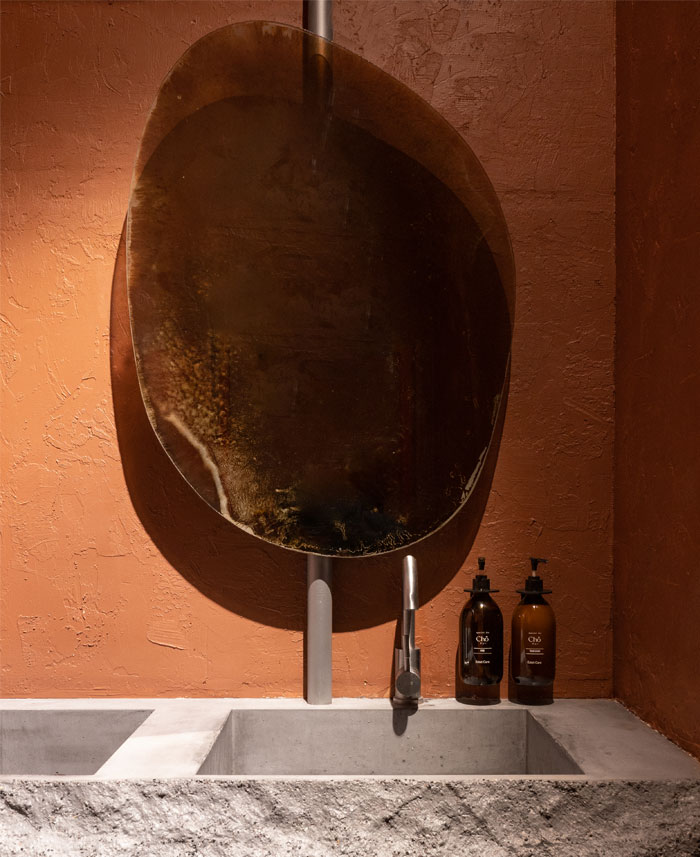 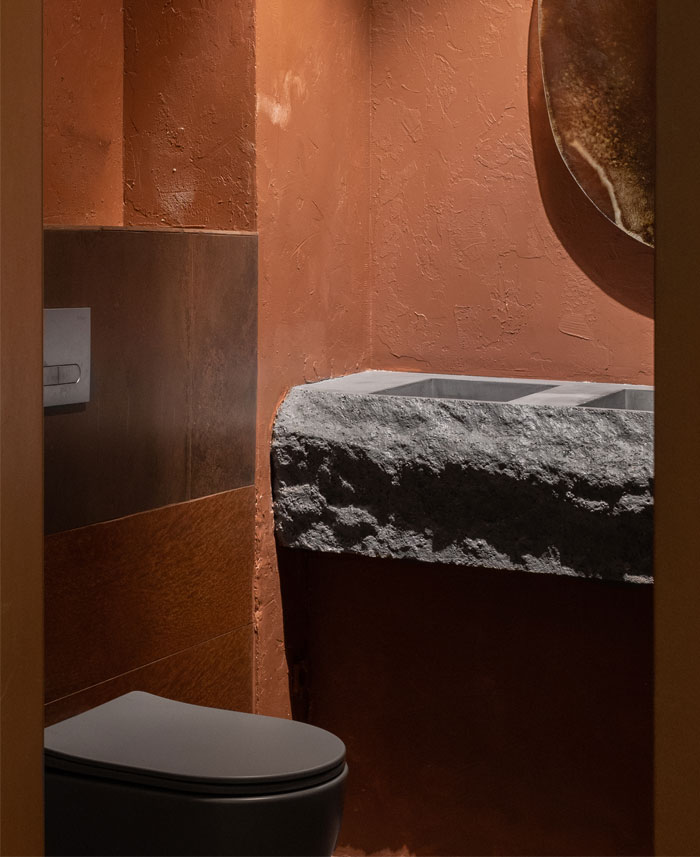 Julia Fox Gives a Tour of Her “Underwhelming” NYC Apartment on TikTok, and It’s Surprisingly Normal

5 Ways to Bring The Outdoors In, According to these Plant-Focused Projects

I Tried the "3 Things" Nighttime Routine and It's the Best...

B&A: A Run-Down Mudroom's $300 Redo Brings Cottagecore Vibes Without the...